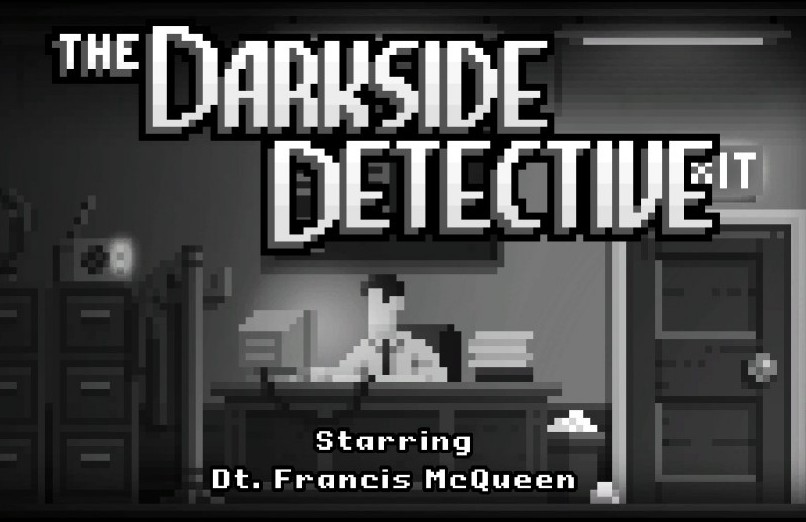 I don’t know about you but I am a child of the 90s through and through. I loved the bright colors that came along with the decade, similar to the 80s but with more edge. That’s also when one of my favorite childhood book series came out, Goosebumps. The books had me scared and creeped out I thought that a mask really could just up and posses me or that a little wooden puppet could come to life and want to kill me. Then the TV show arrived and turned everything on its ear. Back then it was between Goosebumps and Are You Afraid Of The Dark? that reigned supreme in children’s horror entertainment. Another product of the 90s was point and click adventure games! Who doesn’t remember Monkey Island or Indiana Jones and The Fate Of Atlantis? Now, I want you to take those two things; Goosebumps and point and click games, throw them in a blender with a little Chris Farley from Tommy Boy and you will get The Darkside Detective!

This game, if you couldn’t tell already is a point and click adventure title. It came out back in July 2017 for Microsoft Windows, Linux, Macintosh Operating Systems and of course the Nintendo Switch. Like every Saturday I shall be reviewing the goofy antics of the Darkside Detective from the Switch version. We will see if it’s worth your hard earned money or if it’s…well, not worth your hard earned money. To the review! 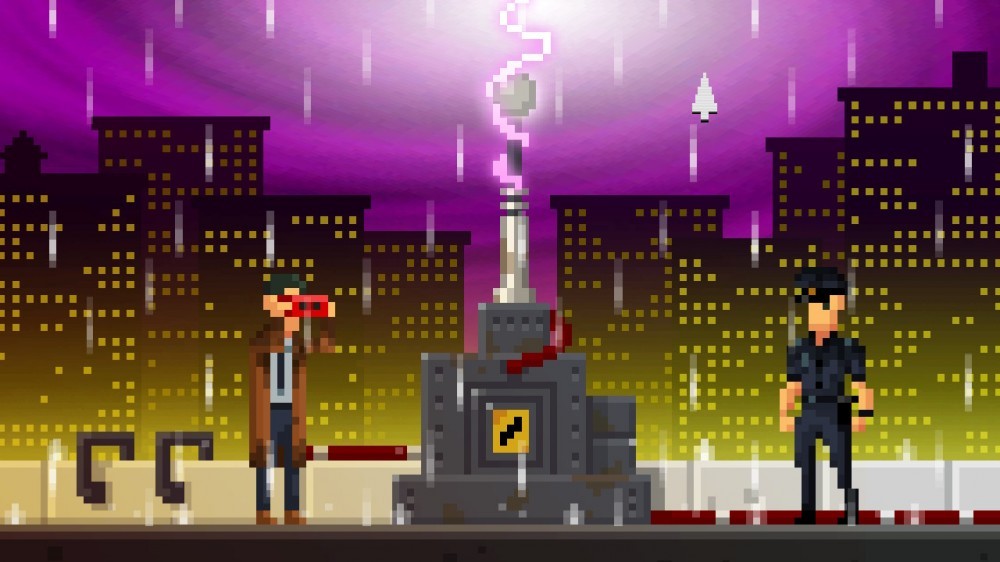 Right from the start, the game sets up the scene that you, the player, should not take it seriously. Like, at all. It starts off like a B horror movie, complete with listing who the cast of characters is. The main character being Detective Frank or Francis McQueen. I give a lot of points already for the last name alone. We follow Frank and his partner officer Dooley on their cases throughout the town of Twin Lakes to uncover mysteries about the weird goings-on. From a seemingly normal missing persons case to a haunted library with some of the best authors in history arguing back and forth about whose work is scarier. They eventually get a glimpse of a book that is the in-game equivalent to Twilight and agree THAT’S the scariest book ever written. There isn’t a real linear storyline with this game and that’s ok, you don’t always need a real in-depth story to appreciate a game. The interactions between Detective Frank and Officer Dooley are hilarious, think of something akin to the relationship between Abbott and Costello. Or for a more semi-relevant reference Drake and Josh from Nickelodeon. You have the straight man played by Detective Frank McQueen and the goofball played by Officer Dooley.

Although both our characters have an interesting dynamic that’s not to say that Officer Dooley has nerves of steel like the Detective. Officer Dooley would be much happier getting free doughnuts or taking a mid-morning nap at the office then get any mystery solved or do anything too scary. Which just adds to his character and the fun of the game in my opinion. So we will find the Detective by himself sometimes throughout a case, searching through creepy areas looking for clues. There’s not only a lot of humor with the back and forth of Dooley and Frank but a lot of humor with their interactions with the citizens of the town as well. You would have to be a tad bit crazy to live in a town where strange things happen regularly and you don’t think to just, I don’t know, move to another place. The humor alone is worth picking up the game, I kept finding myself laughing at every new piece of dialogue. For example, the game is incredibly self-aware and would point out when Frank would be looking for clues he states in one part that he’s looking at a picture of someone playing a game about a little-pixilated man rummaging through garbage looking for clues. 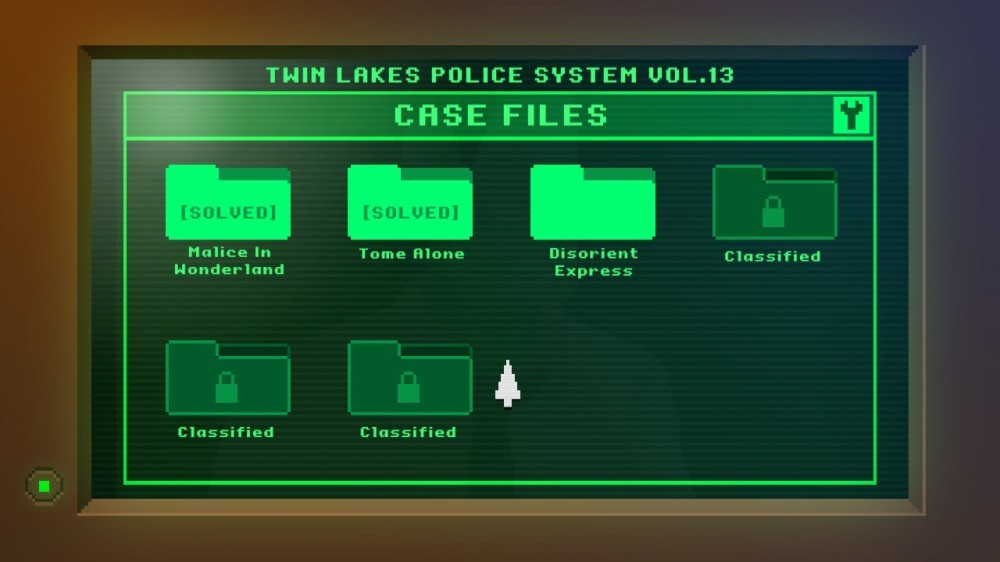 The concept of a point and click adventure is really in the name, you point your cursor on something, click on it to interact, and see what happens. Sometimes you get an item by searching in places you might not think to search in. Like a toilet for example, no I am not kidding. With every different location, all you really have to do is literally click on everything you see. Paintings, dressers, garbage cans, officer Dooley to see what stupid thing he will say next. Everything and anything you want to check out. The premise is simple at its core but it’s engaging if you can’t collect anything from clicking on something the game will tell you in dialogue. Without a doubt, it does the genre well in that aspect. While going on a clicking frenzy you’ll be able to combine certain items to help with solving puzzles. If the combo sounds ridiculous, like combining a can of whipped cream with a fire extinguisher to put out a fire, odds are that’s the right choice. You will also come across some mini-games as well. Some are pretty simple, some not so much. There’s one game that you need to stop a computer virus from spreading. In order to do that you need to hit the green anti-virus and corner the virus, the thing is there isn’t really an obvious pattern. I completed it by hitting a lot of green tiles and hoping for the best. They are fun to play regardless and it adds to the charm of the game.

My personal problem is the lack of movement in the characters. When going from one panel to the next the characters just stand there. Sometimes they move their heads looking around or bring a bottle to their face as though they’re drinking. I know it comes with the territory for the minimalist idea the devs are going for but I enjoy a little more motion out of my characters. Monkey Island is still hailed as one of the best point and click adventure titles and was made more than 20 years ago. Guybrush Threepwood is at least animated and has a walk cycle in that. They animated the surroundings a bit which adds more to the game and makes the game actually feel like an environment. It’s a personal grief I have with the game but it makes up for all of the non-movement with atmosphere and humor. 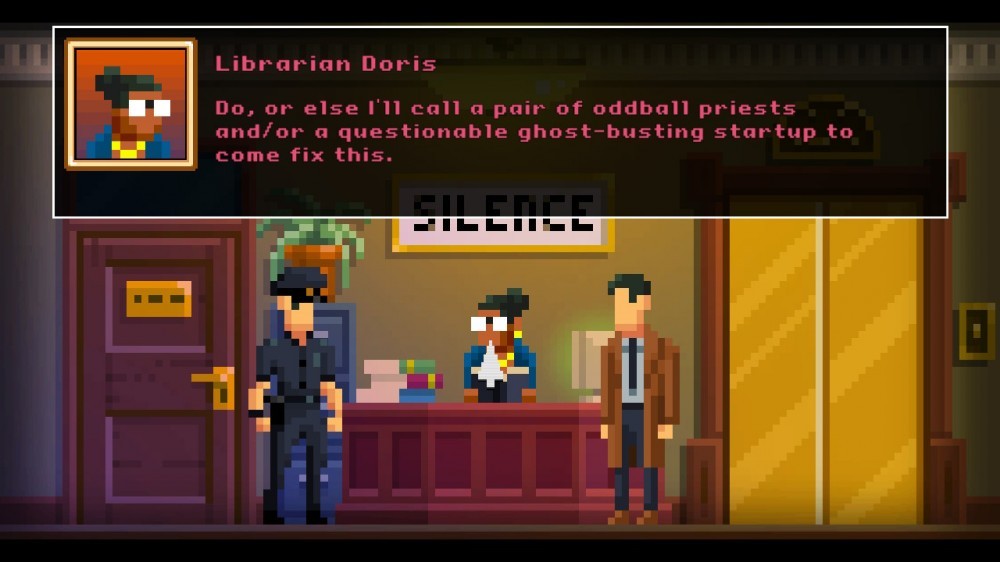 Just about anyone who loves creepy or scary movies will tell you there is one thing that is the most important thing that sets up the atmosphere and builds up the tension. That’s right, we’re talking about music. Have you ever tried watching a horror movie without music? It’s hilarious! Go to YouTube and do a quick search, you’ll see what I mean. One of the best things about this title is the music. This an instance of “do not judge a book by its cover” moments, just because something looks heavily pixelated for a simple aesthetic doesn’t mean it will have terrible music. If you remember the good old PlayStation days you might remember the X-Files game. I bring that up because the music from that X-Files game sounds like it made its way onto this one, which isn’t a bad thing in my opinion.

The tracks, like most games, are on a loop of course. The game loops the tracks so well, however, that you don’t notice it’s looping. Some titles have a tendency to halt the music abruptly and then restart it, which tends to irk a lot of people including myself when trying to get invested in a game. Some points you will be listening to a nice smooth jazz kind of track and then upon finding some clue, it will go into an eerie synth track, like you would hear in the X-Files! Anyone else starting to see a correlation here or is it just me? All in all the music keeps you vested in the adventure and does its job incredibly well, like Hollow Knight I could just listen to this music all day and not play the game to enjoy it. That says something right there. 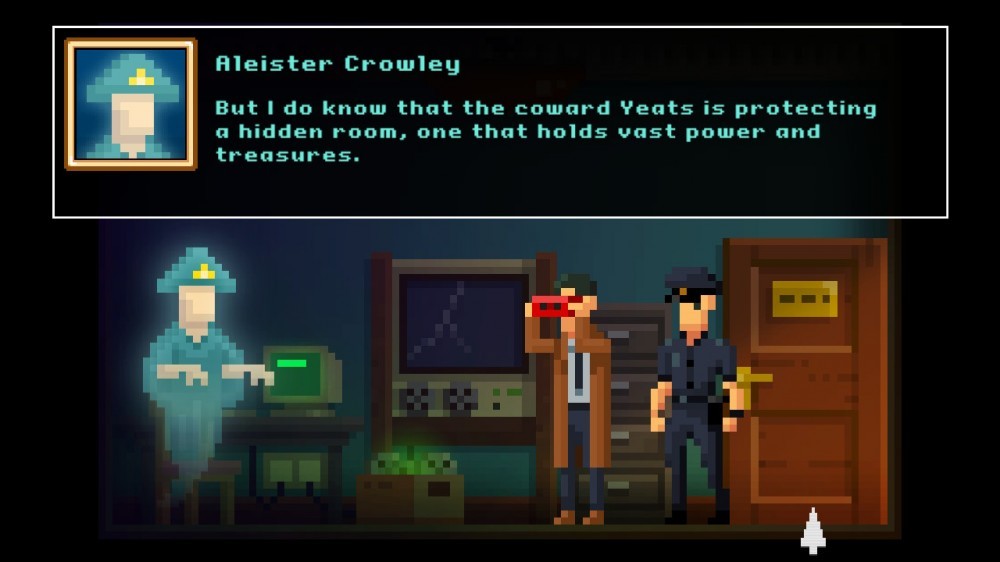 If you are looking for a blast from the PC past of point and click titles you will not be disappointed in this game. It has just about all the elements you are looking for, interesting stories for each case, hilarious dialogue and fantastic 90’s horror synth music! You can easily complete the game in a weekend if you wanted and it is not at a terribly high price either. If you own a switch and love point and click titles, I encourage you to pick up this title.

All4Gamerz gives The Darkside Detective a 9/10, a bit short but a great game that is sure to please.

That’s it for this Saturdays Nindie review if you liked what you read let me know in the comments below. I would love to know what you guys thought of it. Until next week everyone, take care!