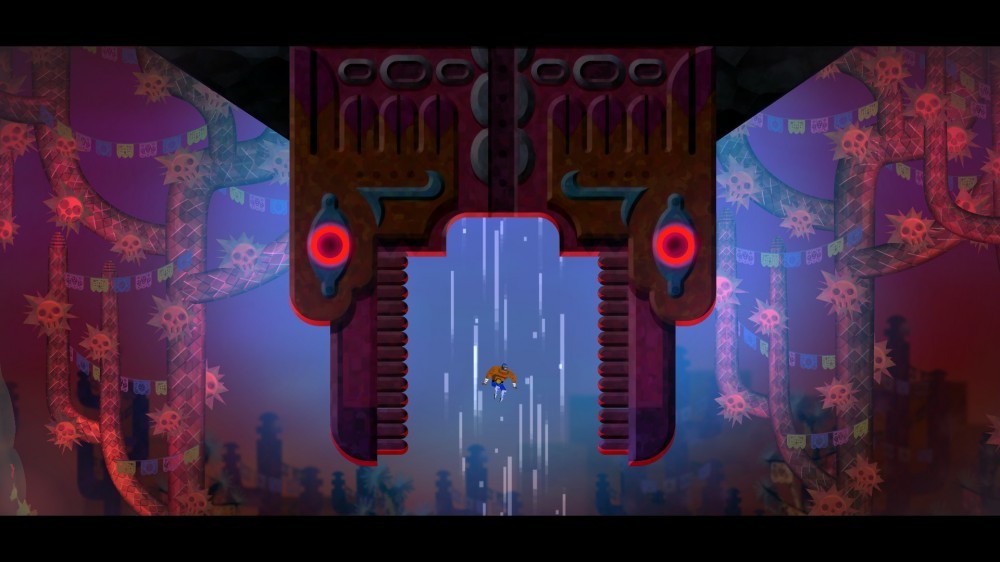 Hello, boils and ghouls! October is here and you know what that means… SPOOKY GAMES! The rest of this month I will be playing eerie games for your entertainment. First up is Guacamelee! 2. While it isn’t really spooky, it does contain some ominous undead enemies. Now, to pile-drive right into this week with my take on this suplex of a sequel.

Juan’s Back and Stronger Than Ever

After Juan saved the world in the first game, we find him on hard times. Turns out that once you defeat the big baddie there are no more baddies to beat. When your whole shtick is to uppercut some skeletons in the mandible there really is much else once they are gone. Juan has potentially gained a few pounds and a strong feeling of apathy.

Luckily for Juan, there are multiple timelines! He is promptly asked to follow his trusty Goat-man Uay Chivo to the “Darkest Timeline” where that timeline’s Juan is dead. Without Juan, no one is there to protect an ancient magical Guacamole recipe. With guacamole on the line, it is time to whip yourself back into lucha-shape. You must save the Mexi-verse before it is thrown into complete chaos. So grab your mask and get out there! 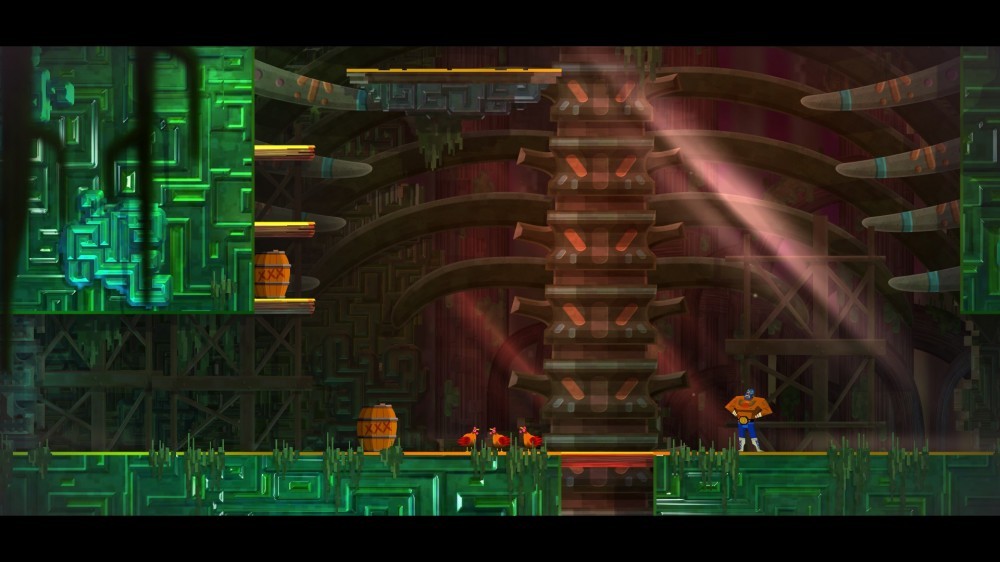 One of the things that makes me scratch my head is how DrinkBox Studios does so much with so little. Using only text and subtle animations they give all the characters so much personality. With a basic gameplay element like platforming, there needs to be more to it than just jumping from one platform to the other. Just when you understand a new concept, they throw in a new element just to spice things up. But instead of just shoving it in they slowly and carefully place a few situations to ease you into it. 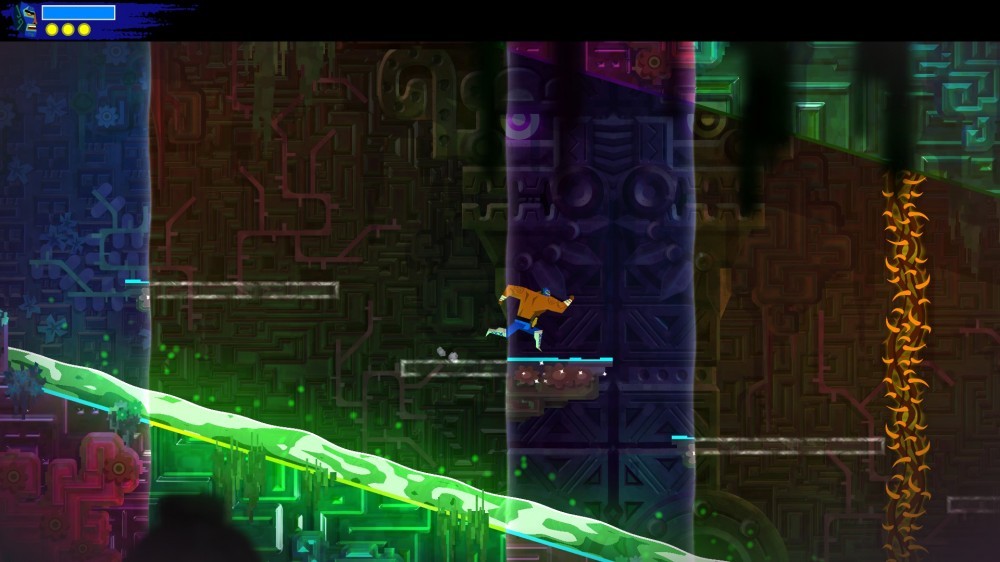 For example, before you get the ability to switch dimensions there are some levels that have a wave that will bring in obstacles and enemies to the foreground. You have to dodge these with rhythmic timing. Once you can change dimensions, You are the one in control of the change and must do it to progress. Then when you are finally confident in your skills, they make it so you have to both follow the rhythmic dimensional rift and change the dimensions on the fly. It’s a challenging feat to overcome, especially when the timing can become tight. On top of all of this, the same abilities that you use to blast bad guys are needed for platforming. It keeps you true in your movements since there is a stamina meter that will limit the number of times you can use them to aid you. 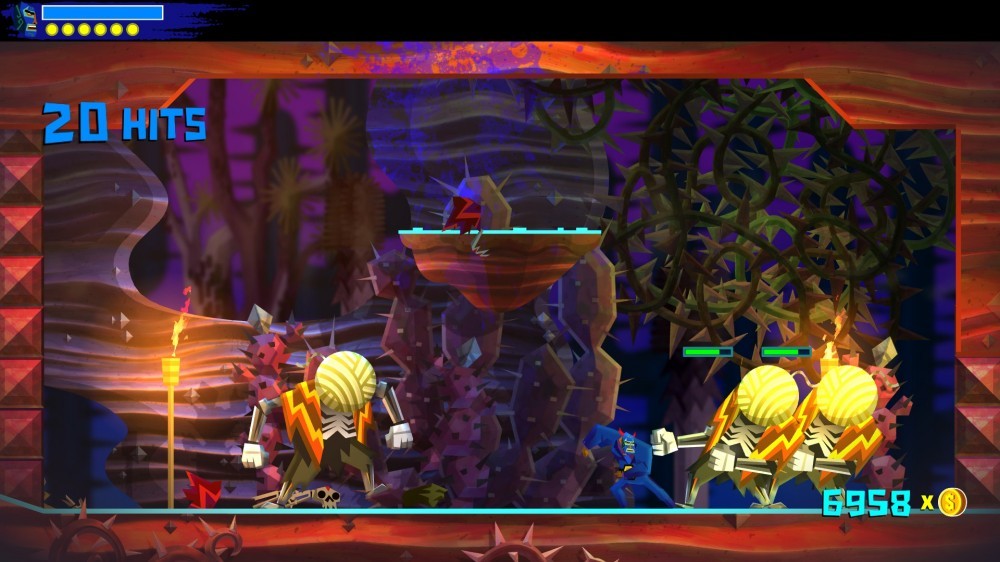 While the platforming is solid, what are you even platforming for… Its to get to your next fight. The combo busting Luchador has never been better. Juan has almost the same type of fighting prowess as he did in the first Guacamelee but this time it feels much more resolute. Throwing uppercuts just to follow up with a well-placed bodyslam is pleasing to both the eyes and the mind. This game does a great job at making you feel clever. The developers place the enemies in a way that encourages you to use the surroundings but it’s not a gimme. With a well-timed hit or throw, you can swiftly clear a room with style. 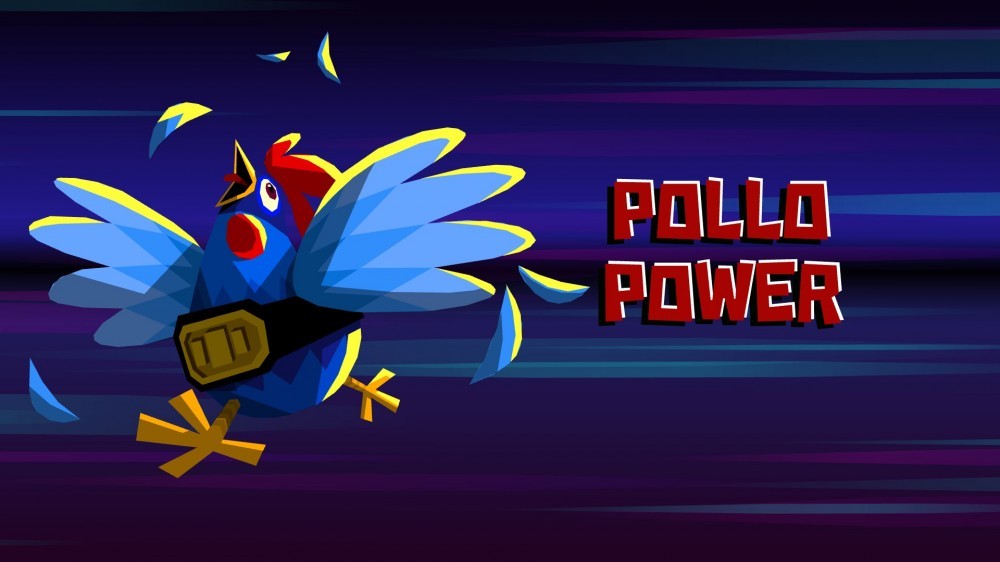 Oh, and chicken combat is probably the most satisfying feeling in the world. Bawking while slamming an enemy into the ground is rather gratifying. 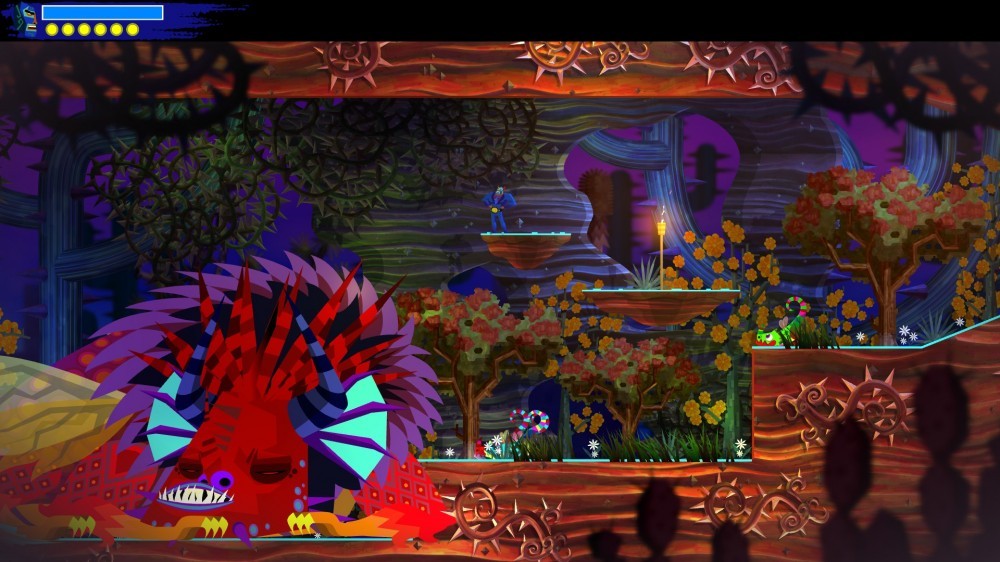 One of my favorite parts of the game has to be choosing how to interact with a situation. DrinkBox has a subtle humor that just makes me smirk. The basic formula they use is, I have this thing I hold dear so don’t mess with it. Then they leave you to decide what to do with it… It’s just too hard to walk away from it. What else is a platforming luchador to do when presented with a glowing object in a room that is asking to be destroyed? The best part is that if you manage to walk away without succumbing to the pressure, there is no reward. It is rewarding you to destroy someones belongings. I love it! Even in one of the boss fights. If you stop and refuse to hit them, their dialog changes. It’s a simple yet memorable part of the game and allows you to share experiences with others that played the game. Well played DrinkBox… Well played.

If you haven’t already noticed Guacamelee! 2 has a pleasing art style. On top of the wonderful art, the music really pushes it beyond just an homage to Hispanic art and culture. It is very difficult to stand out with such a flooded market. Steam hosts many platformers due to the fact that they are easier to make than other types of titles. So only the cream of the Crème de la crème rise to the top. Guacamelee, Hollow knight, and Ori and the Blind Forrest are all great examples of games that pull you in with a simply wonderful aesthetic but keep you playing with challenging gameplay. 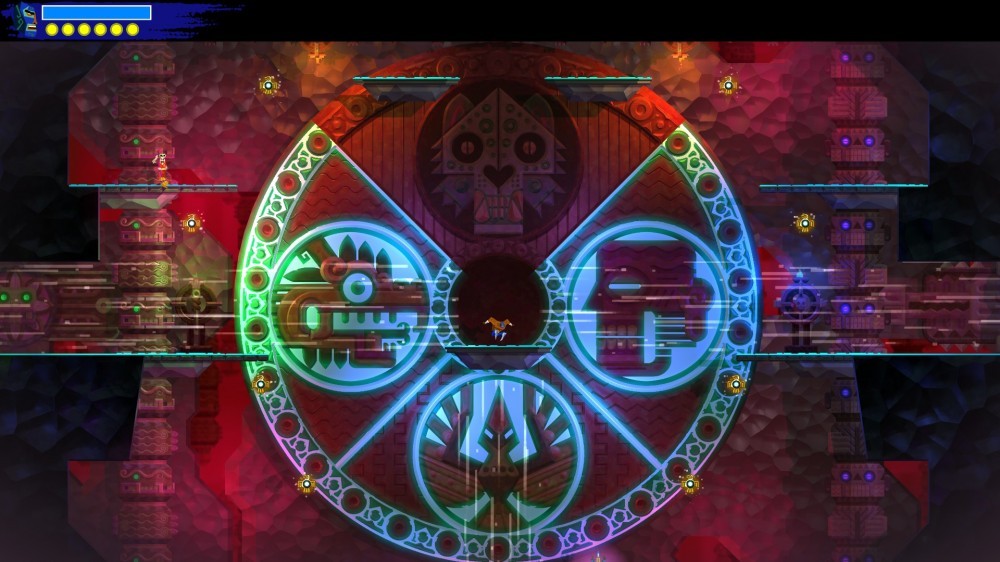 I remember playing the first Guacamelee and realizing how much I enjoy the music. This time around, They brought back some old favorites but made them better! Even if you don’t get this game, which I highly recommend you do, check out some tracks on youtube. 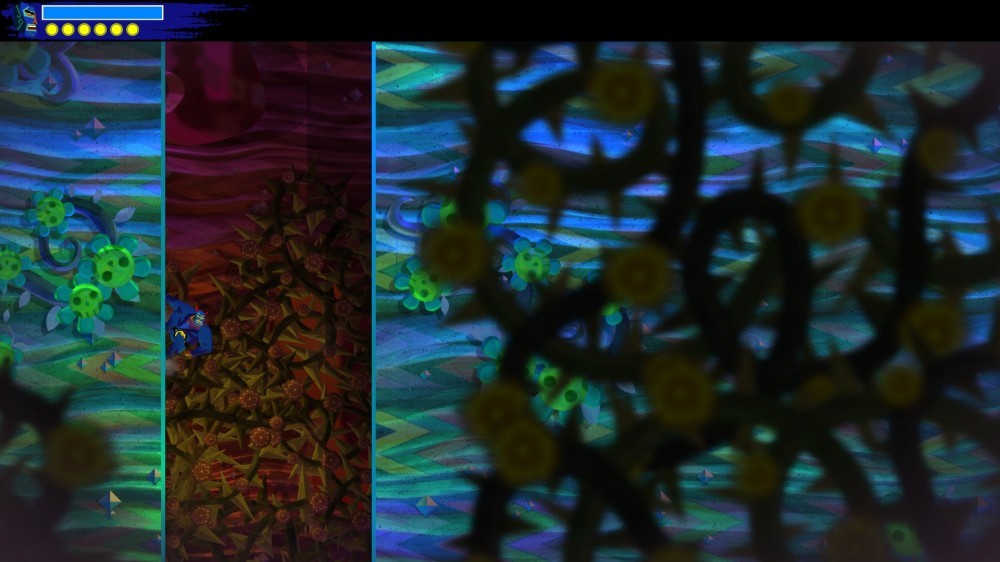 The way DrinkBox uses both the foreground and background to show depth astounds me. I think it even perplexes them sometimes since they have some levels where they just show off the glamorous aesthetic of the game. Games like Hollow Knight, Ori and the blind forest, and Guacamelee use their art to draw people in and keep them with thoughtful and rewarding gameplay. Platformers are a flooded market so you really need to stand out if you don’t want to be taken by the depths. 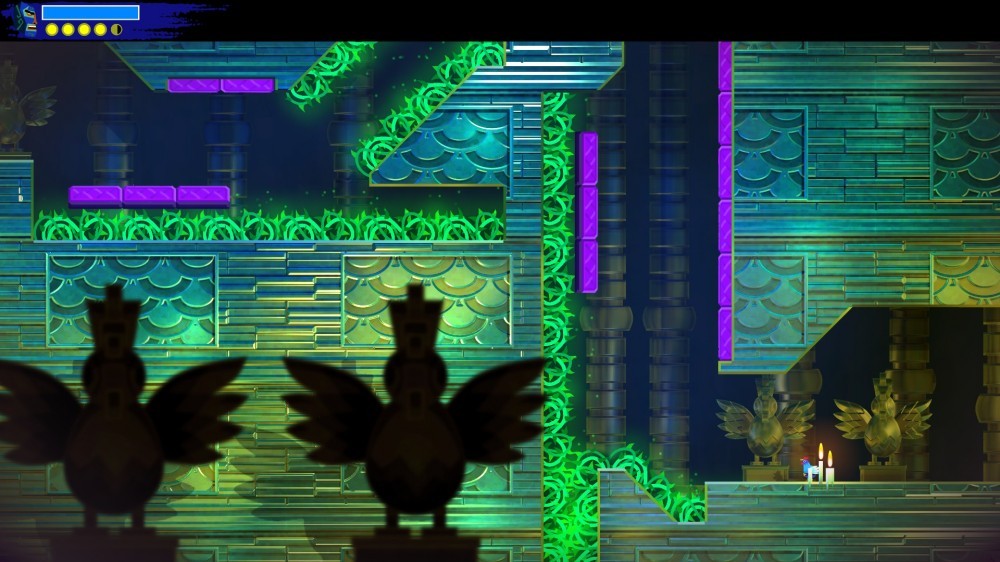 Guacamelee! 2 is a magnificent sequel to its predecessor. It adds to all the components you loved in the first but sprinkles in some ingredients to make it just right. While some challenges will make you feel stupid after multiple failures time in a row, It is never frustrating. Even when in an overwhelming situation, you can still find tranquility in the surroundings. The simple looking art style is deceptive. DrinkBox has no doubt put in subtle details that really push this game above other contenders. If you haven’t played the first you might find yourself lost in the story. So I would recommend playing both if you are even slightly interested in platformers.