like its predecessor, takes a simple idea and turns it into an intense game of dodgeball. The basic concept of the game is hit the ball into other players. You can control a selection of unique looking characters that each wield a special ability to help gain a special advantage over their opponents. After playing for over 9 hours in a weeks time, I can attest that this game is simple to learn but difficult to master. With tight controls, imaginative characters, and an impressively catchy soundtrack; Lethal League Blaze deserves some attention by anyone who enjoys casually competitive indie games with friends or strangers alike. 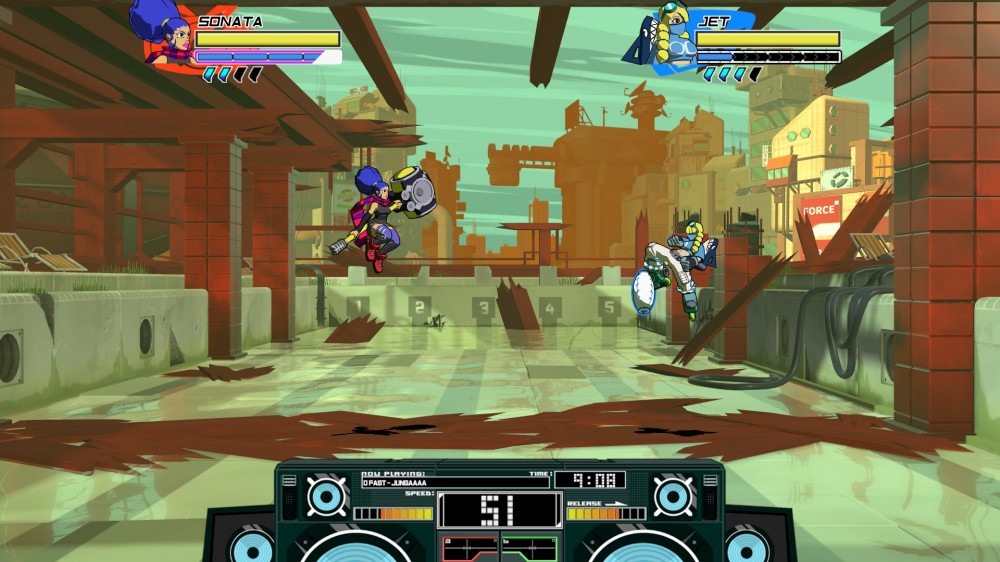 The ball will bounce endlessly from one side to the other unless interrupted by another player. Once the ball makes contact with the other players, they will lose health. After their health bar is depleted, they are sent flying off screen leaving the player (or players) the victor of the round. Whoever lasts the most round can crown themselves the winner of the game.
Now, what makes this game “special” is the various exchanges that can happen to change up the game. At its core, Lethal League is a game of pong. The ball moves in a predictable manner. if I hit the ball at the corner and leave it bouncing forever, it will repeat its pattern of movement until it is acted upon by another force. Now that that is established, some elements are added in to spice the gameplay up a little. With every hit of the ball, the speed of the ball increases incrementally. On top of this, the player batting the ball can hit the ball in a way that leaves its directional input masked to other players on the field of play. This takes away the predictability of the ball, leaving the opposing players to guess where the ball might go to next. Luckily some other mechanics exist to get into the heads of your adversaries. Bunting, throwing and using your special is a way to gain a proper advantage to trick others and pull off a big win. Add the unpredictability with the acceleration of the ball during long-lasting rounds and you got yourself a fast-paced and enjoyable experience. 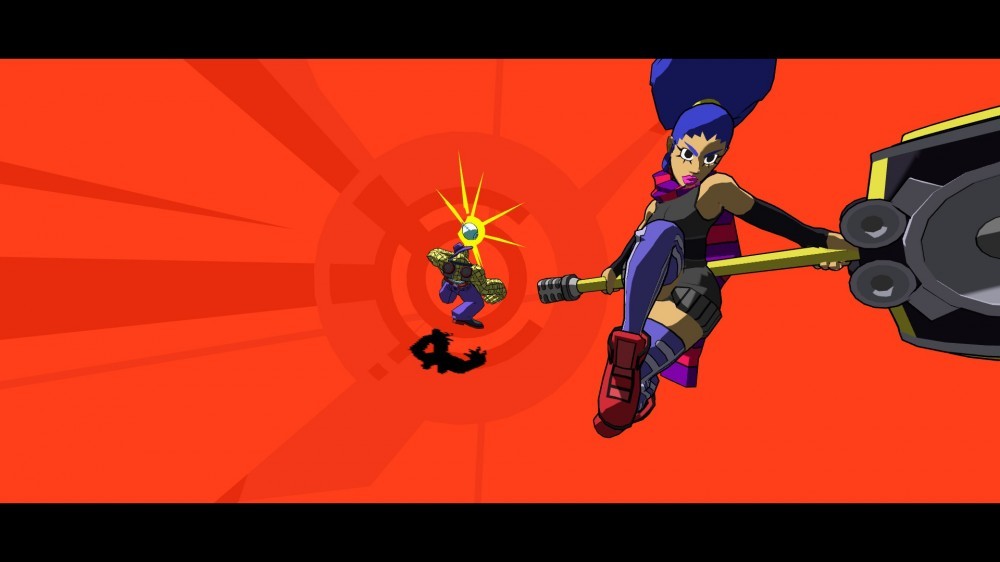 What Lethal League Blaze Does Well

Start up this game and you will see how much personality it has. the characters, music, maps all have minute details that keep the game fresh on your 9th hour of play time. Unlockable outfits and stages reward the player for playing the game and reward them to show off their plunder online. Games rarely do this nowadays with microtransactions allowing you to purchase cosmetics so this is a refreshing change of pace and a great reason to keep playing! Tight controls and unforgiving reaction time keep the game tense, especially during a long round where the ball can reach unmanageable speeds. Having a high skill ceiling helps you understand where you place in skill level. like fighting games, it helps you understand where your strengths and weaknesses reside so you can better work on them if you please. This being said, you can take the game less serious and still have an amazing time playing casually with friends online. Fun game modes like lethal volley and strikers allow a change of pace after some intense matches of free-for-all. 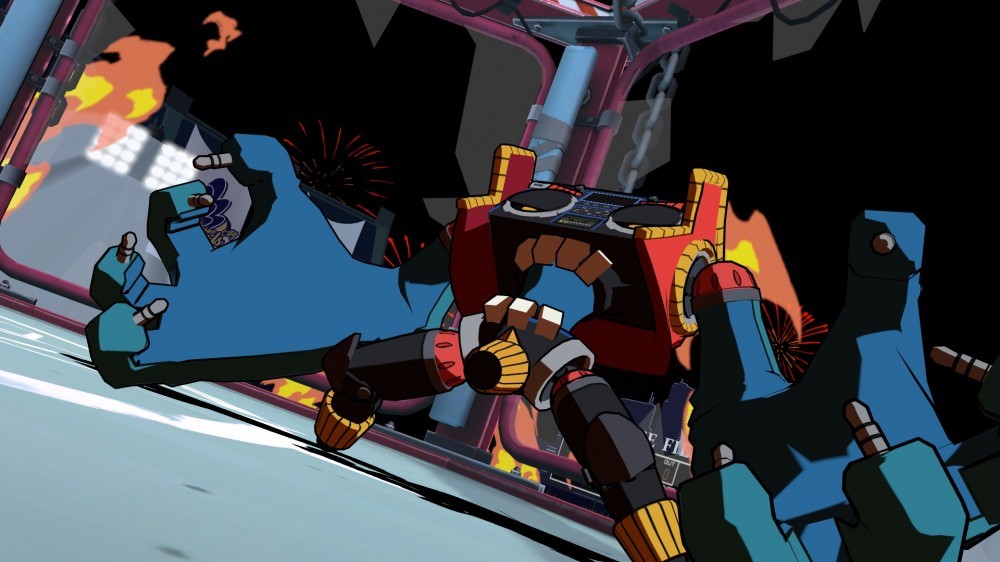 Online play, while just released, can be buggy at times. If you find yourself in a laggy match, it can become desynched and revert a couple of seconds back. This can really suck, especially if you are in a really tense game with a player of equal skill.
I know I have already talked about the tight controls making the game purely about skill, but the controls can often feel too tight. Animations cannot be able to be canceled once they begin. This can be a bad thing once the ball gets extremely fast. One misjudgment or accidental button press can leave you sitting out of a match to watch.
Story mode and Arcade mode are too simple. It doesn’t really prepare you for the devastation you will face online. The final boss, DoomBox, is more representative of a casual match online but that is only one fight. A difficulty selection for AI in Arcade mode would be a nice addition to truly provide you with an idea of what online has to offer.
Some advanced techniques for each character are hidden from the player. Each character is equipped with a special that allows them to do something different to the trajectory of the ball. It is not written anywhere or explained to them what each one does. Going into training can allow you to understand what each character special is, but why not just have it written down in their bio or something. There are also intentionally hidden things in the game that an avid player might find by accident or through witnessing it being done online. Its nothing groundbreaking but it would be nice to see them somewhere in the game so I don’t have to search online to find out how to perform them. 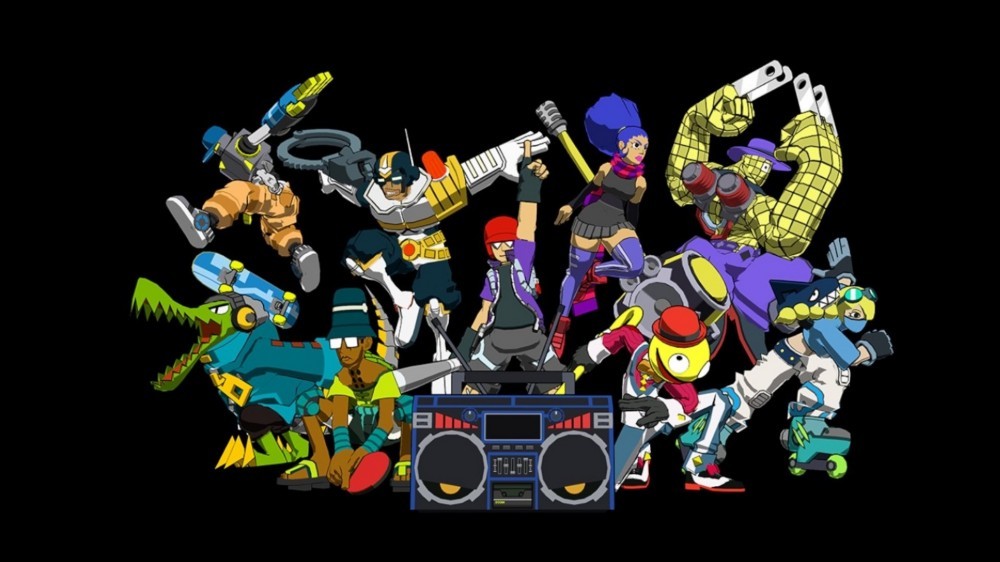 Lethal League Blaze is an extremely successful revamp of the original. It looks and feels excellent. The game doesn’t get old and keeps you humble with constant skill checks. Online and local play with friends can be a fun way to pass some time or even settle a bet. There is pleanty of unlockable content to keep you busy, accompanied reasonably high skill ceiling to keep you working towards becoming a pro. A small list of characters and stages to choose from make me feel like they might release some content in the future but nothing has been stated by the developers at this time. If you want an unpredictable compact casual/competitive game that reminds you that games are supposed to be fun, look no further.