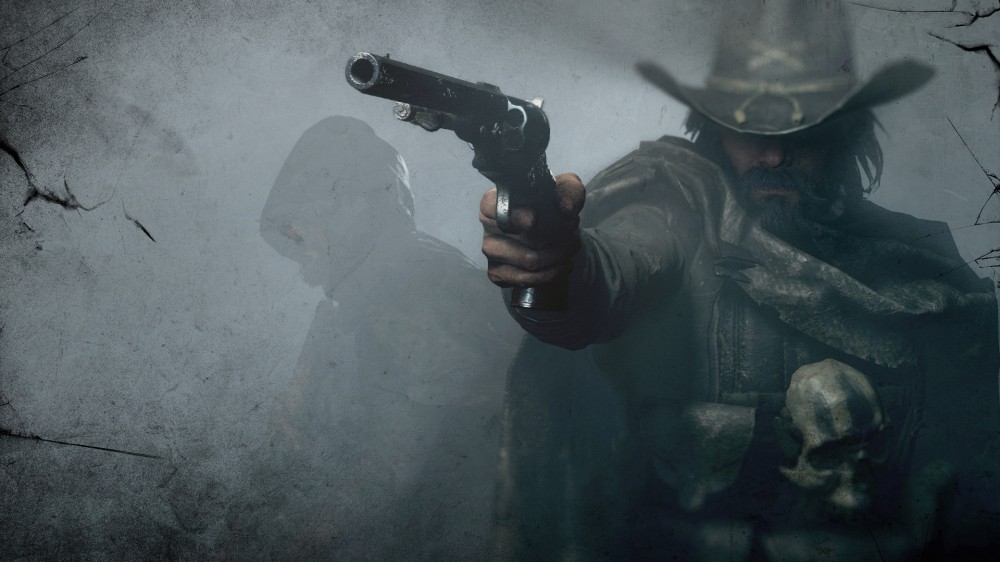 Hunt: Showdown is a PvPvE (Person vs. Person vs. Environment) / First Person Shooter / Bounty Hunting game developed by Crytek and it is one of the few games that are truly thrilling from beginning to end. Every decision you make will be tested. Every shot you fire will be heard. Every enemy you face could be your last.

You play as a well-dressed hunter under contract to collect on a bounty. It is set in the Louisiana bayou in 1895, where every man was dressed to kill and agriculture was booming. Too bad for you, you don’t have much of a green thumb. You take pride in your uncanny ability to find your prey. As a hunter for hire, you must find and collect you assigned bounty for full payment. Be careful though, other hunters are out there and they are looking for a piece of your pie! If you feel as though you aren’t manly enough to get the job done and want to get out alive, you can leave the hunting grounds at any time and collect some of the pay based on what you bring back. Oh before you go out, don’t forget that the hills have eyes. The dead zone is loaded with monsters and obstacles that will leave you vulnerable. Try not to die because death is permanent. 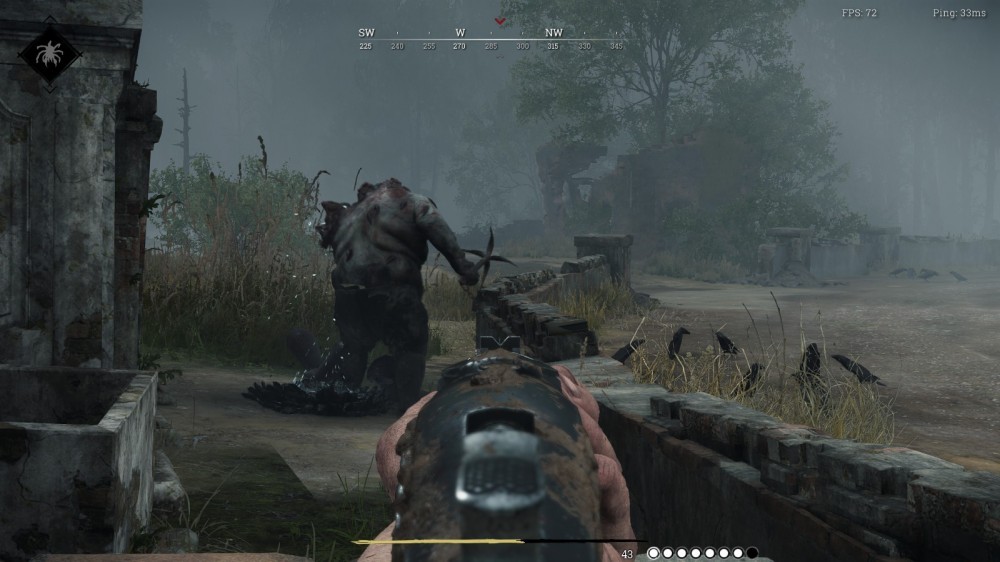 Second to other Hunters, mobs in the game are down right abusive. There are 5 monsters types littered around the bayou, the Grunt, Hell Hound, Armored, Meathead, and Hive. Each monster has the ability to end your pitiful existence if you don’t respect them. I am not afraid to admit that I died to a horde of grunts due to my poor management of the situation. Each monster is strong in their own way. The Grunts tend to spawn in packs. This means that if one finds you, there are bound to be more right behind them. Two quick melees to the face with a gun can quickly and quietly dispose of them, so be sure to not waste ammo on them. The Hell Hounds, like Grunts, spawn in packs but they are much more of a handful. They are quick and take more strikes to kill. I recommend avoiding them at all costs. The Armored is a heavily armored foe that is weak to fire and rather resistant to bullets. They tend to be slow until provoked. The Armored can dish out loads of damage and must be a top priority when being attacked. The Meathead is a blind and deaf monster covered in leaches and bloated with water. It will patrol around leaving leaches behind to guide them to prey. They are hard to bring down and tend to be more of a bullet sponge. The Hive, while easily slain with a well-placed head shot, can unleash a swarm of bees that poison you. 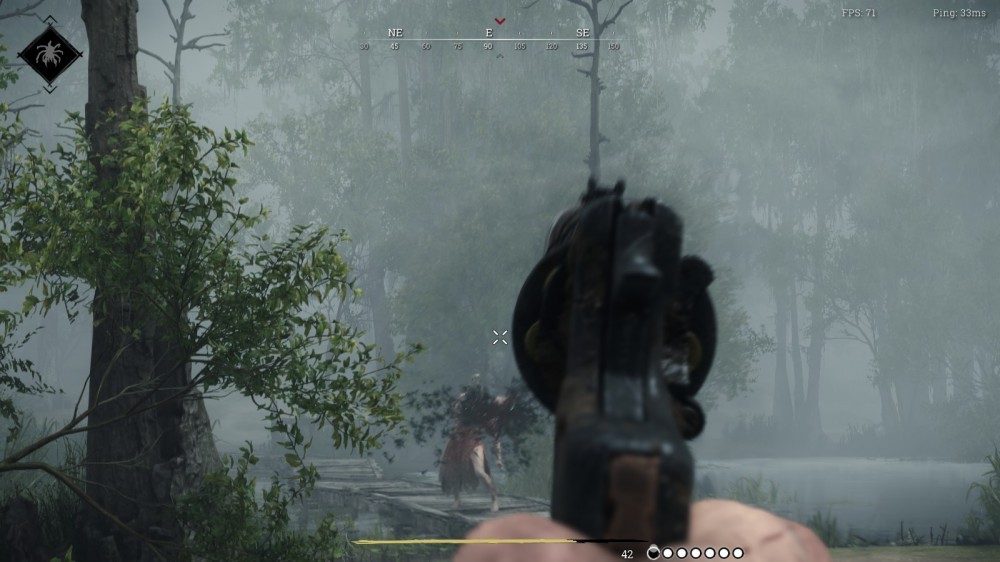 While exploring, it is important that each monster is identifiable. The design of each mob helps you quickly decipher what you will have to deal with in a short amount of time. Based on the weapons you take some mobs may be easier to deal with than others. On top of a solid and identifiable design, all have a distinct sound that can be heard even before seeing them. Knowing what you are up against is important for managing multiple threats.

Other than the Monsters, there are non-damaging obstacles that are placed to help enemies find your location through sound. Glass on the floor, hanging chains, caged animals, a murder of crows, and water. These obstacles are cleverly placed, allowing other hunters to pinpoint your location if you are not careful. Sound is a very important aspect of this game and using it can be the difference between you escaping and certain death.

Last but not least, the boss monsters. There are two possible bosses as of patch 2.1. The Butcher, a giant with a pig head, is weak to explosives and shotgun blasts. It will chase you down and deal massive damage if it catches up to you. The other boss is The Spider. The Spider is a fickle foe that can climb on walls and ceilings. It runs back and forth quickly so you need to bring some more precise firepower. It spits poison so be ready with an antidote shot.

The moan of a monster, the crack of a tree branch, the sloshing of water all the sounds in the game are given great detail. It helps build tension to make a memorable stand-off. 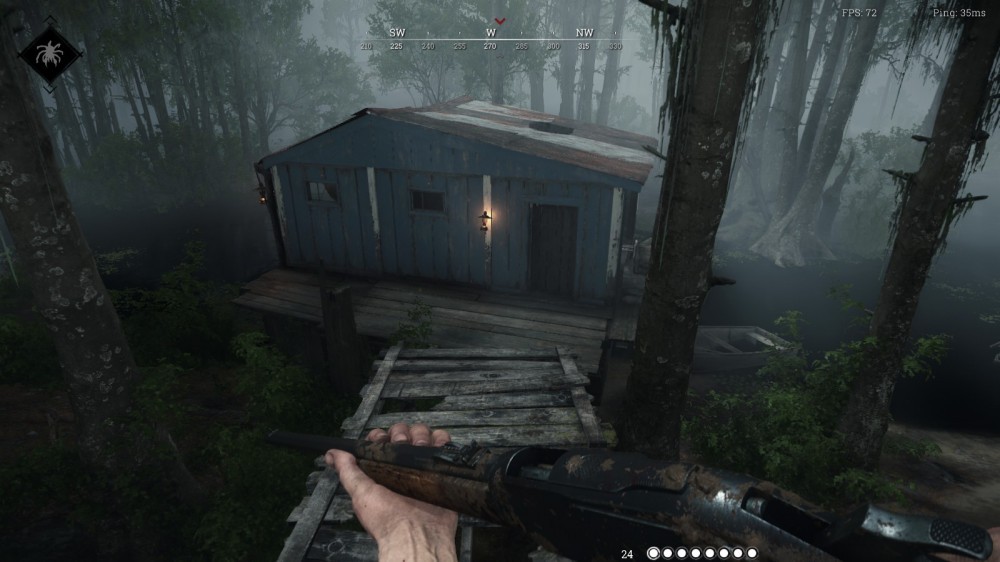 You are sitting in a hut surrounded by water and hear a distant shot. It is hard to tell how far away it is but you know what direction it is coming from. You go to investigate and realize that there are footsteps above you. You go to move and realize that you are surrounded by glass shards. They crunch under your boots, the footsteps from above stop. A moment passes and you hear nothing. Maybe the noise from above was all in your head. You go to advance forward and you hear shots in the distance once more. Suddenly the footsteps are back and this time they are on the same level as you. You turn and face the direction to a barred door thumping. Someone is outside and they know your location. You run past the glass to climb through the window and hear a humming. It is a humming that you have become familiar with. You wait. An Armored slowly passes by the window. That surely would have meant death if you had climbed out. You hear the invader move around the corner and become the prey of the Armored. He shoots, it is a shotgun shot, he is reloading. You quickly spring out of the window to take advantage of the situation. 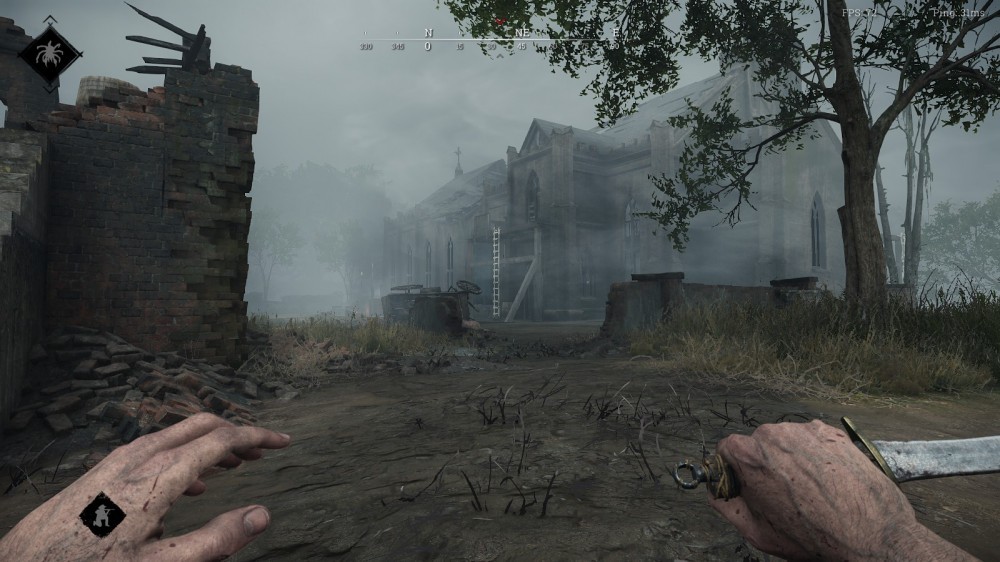 The way the map is designed is nothing short of genius. Remember that the goal of this game is to explore the world. The graphics are stunning and really set the mood. It is an eerie location, it feels almost like the world is out to get you. Each named area on the map has a unique design. The Blanchett Graves is surrounded with tombs with a stairway leading down to a lower level crypt. The Crematorium has hanging bodies and open fires raging inside the building. The Slaughter House has chains and hooks all over. Davant Ranch is littered with dead horses and some on the brink of death wincing in pain. Each location has a special identifying feature that allows you to know exactly where you are without looking at the map. Since the locations are static, You always know that the Slaughter House is always due east of the Davant Ranch. This can be useful for call outs or to make a quick get away. 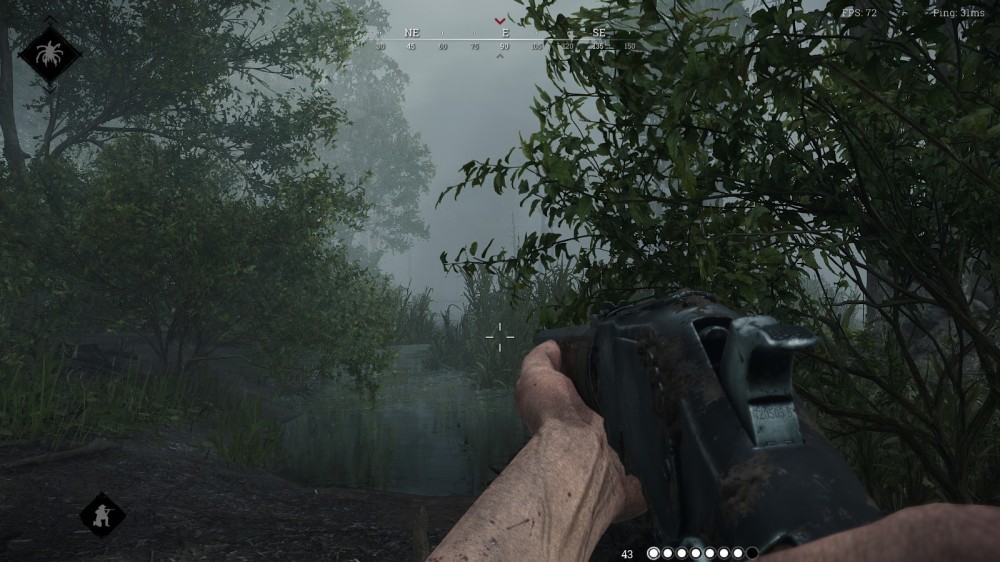 The weather also plays a part in immersion. When the bounty is at night, you make most of what you know through sounds. When it is daytime, you have to make sure that you aren’t running around without cover. 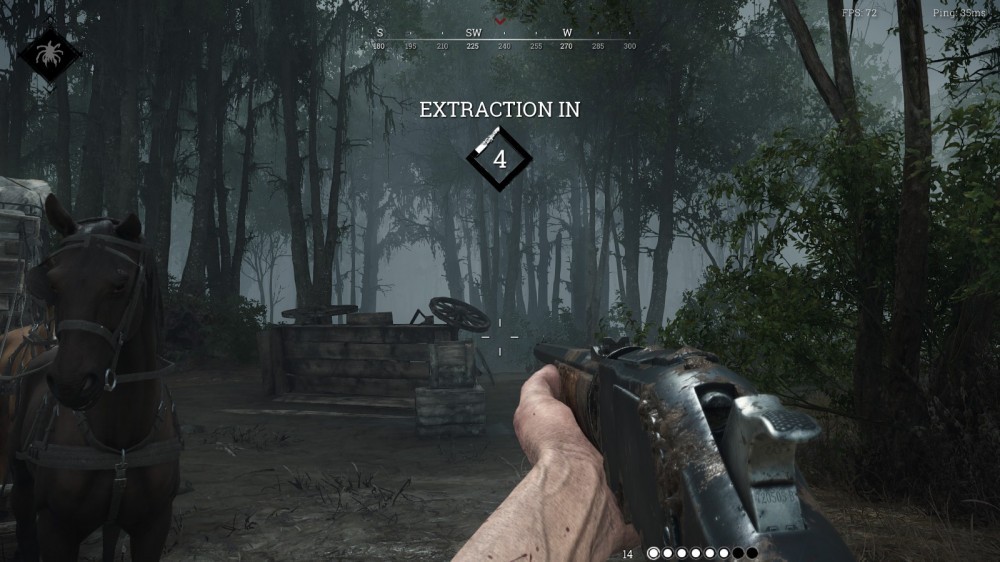 Every minute can be your last. With each successful extraction your hunter gains levels, the higher the level the better fit your hunter is. The problem with that is if your hunter dies, he is dead for good. You have to recruit another one at level 1. This puts some real consequence to losing your hunter. It makes every encounter risky. If you are in a tough spot you can play it safe and leave without risking your life but where is the fun in that. I tend to have a small attention span when it comes to games. I would rather go out and die guns blazing than wait for an opportunity to present itself to me. The Hunt had me sitting in a corner waiting for a clean shot for over 15 minutes. Every second had me on the edge of my seat. A miss could me that my position is compromised and all the waiting was pointless. It is all on the line all the time. 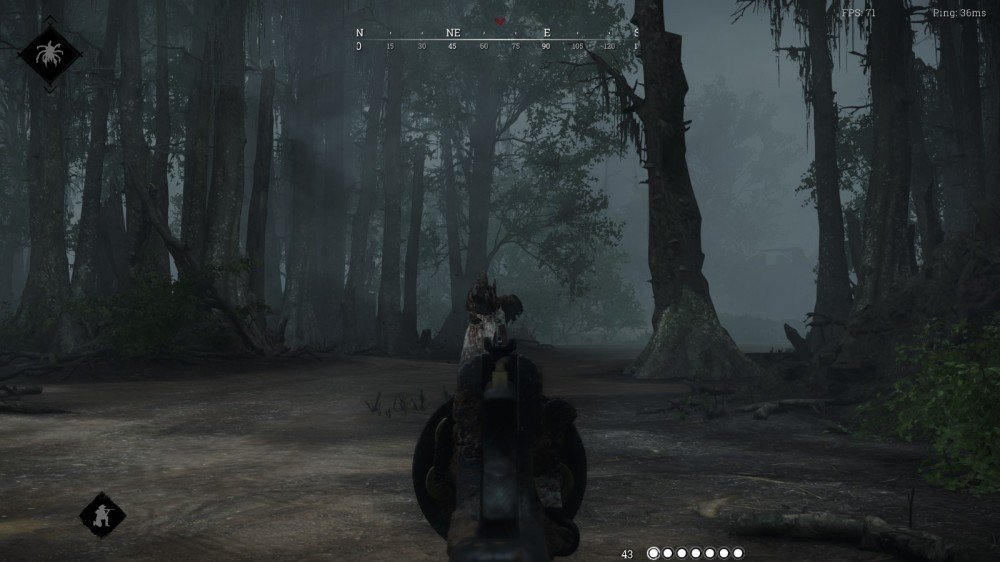 Every PvP encounter I have had so far always starts with my stomach dropping. For some reason seeing another player makes me so anxious that I almost stop breathing. I forget how to function. It is an overpowering rush that I can’t believe a game could make me feel such dread.

The community for this game is astounding. The devs are active on Twitter and Discord. My friend asked a question on their subreddit and it was answered by over 10 people in an hour. It is clear that the people that play Hunt want to see it flourish. An active community is what makes games like this thrive.

Hunt: Showdown is an all around masterpiece. Its design is top-notch and it deserves to be noticed. You play as a well-dressed hunter that is searching for a monster with a bounty on its head. You head out into the Louisiana bayou in the face of dangerous monsters and other hunters that are also looking for the same monster you are.

The sound design is on point. In most cases, you can see more with your ears. Using sound, you can distinguish what kind of enemy it is and where they are. That being said any noises you make will leave you open for an attack. The map is designed to be explored. The whole point of the game is to traverse the area for clues to the boss location.

It is a thrill to understand that any encounter could be your last. Having your hunter death permanent puts an actual consequence to a death. Every encounter with a player makes my blood pump. It’s a real rush and I love it. I love to see some love put into a game like this. Crytek did an amazing job with this one. I am eager to see what else they have to bring in the future.